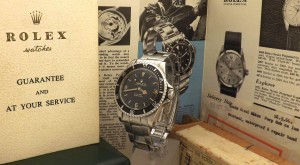 Purchased by the vendors late father, a former RAF officer in the early 1960s, the watch had remained in the family since and amazingly came with all the boxes and papers, it was also in great condition for the period with odd mark and glass scratch excused!

These rare Submariners with Explorer dials were believed to be produced in very small numbers during the late 1950s and early 1960s.